Thank you for your patience while we retrieve your images.


MOGA 2010 was directed by John Elfrank (L Frank) at Mark Twain Lake near Monroe City, Missouri. The theme was Space, because of the movie 2010 Space Odyssey. The t-shirt has Mark Twain in a space suit, standing in front of the monolith with the moon above, 2 red beams of light and encircled by a comet. The Event coin was the Monolith with Mark Twain in different colored suits and a removable pathtag of the moon. This was also the first year of the MOGA Award coin. There was a Gold, Silver, and Bronze (Antique Gold) version for first, second and third place finishers of each competition. These metal colors are the standard colors for the Award Coins today for the competitors. Other metal versions can be made for staff and VIP's. 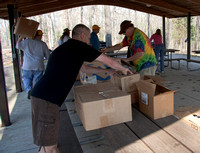